I’m But a Stranger Here

Roswell, New Mexico, conjures one image–ALIENS. The city has embraced its reputation as “The Alien Capital of the World” and the area businesses use the 1947 release of an army report that a disk-like craft had been found near Roswell to hype their sales. The army later said the craft was a weather balloon, but the image of Roswell was set, and UFO theorists have made the city their talking point.

Kathy and I went by the UFO Reseach Center, and unfortunately, when I went by the entry sign, an alarm went off. Guards quickly surrounded me and a research assistant told me that I fit the profile of a space alien, and they asked me to submit to an X-ray! Kathy said there was no need because she knew I was an alien for quite some time. Strange things happen in Roswell! WEG 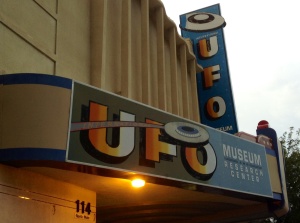