This will be a day to remember!

First, however, a little background. We boarded the Norwegian Jade on Monday afternoon after  a quick shuttle from our London hotel to the Southhampton port. Never having sailed on Norwegian Cruise Lines, we were more than pleasantly surprised with the modern and elegant ambiance of the Jade. A+ NCL. Kathy entered a drawing and promptly won a spa treatment. We were off to a great start. Randy tried to stack the deck on a liquor drawing, finding every available staff person to beg for tickets. I am pretty sure he had over 20, when the limit was two. Alas, cheaters never win!

Day two was at sea–North Sea–on our way to Bergen, Norway. It was a fun day taking in the activities onboard and eating at one of the six specialty restaurants. (There are four other concept-themed restaurants with open seating.) The Brazilian Churrascaria was fabulous–twelve different meats, from beef filet to banana-wrapped hake to lamb chops, all excellently prepared.

Day three, today, was port day in beautiful Bergen. The architecture is old style Norwegian with wooden buildings in dark colors. The fish market is active. You can walk up and point to a fresh fish, and they will cook it on the spot. Whale, reindeer and moose sausage are abundant. The old Lutheran churches in the old town are all under major repair and not open to the public at this time.

We had a scheduled tour for the day with a private tour guide–it was just the five of us, Randy, Melisa, Kathy, myself, and the driver/guide. We were not going to be with the masses of cruise passengers and would see some places regular tours did not see. The trip was spectacular as we drove past large mountain lakes mirroring the mountainous hills that surrounded them. Waterfalls fell from heights above and rushing streams cascaded over rocks below. Better yet, it was a sunny day. We drove one curve after another as we wound our way towards the Hardangerfjord, a major fiord. We were just approaching a beautiful waterfall when a police car motioned us to the side of the road. They asked a lot of questions of the guide and asked us to get out of the tour van. We walked over to the waterfall and climbed upwards so that we could actually walk behind it. 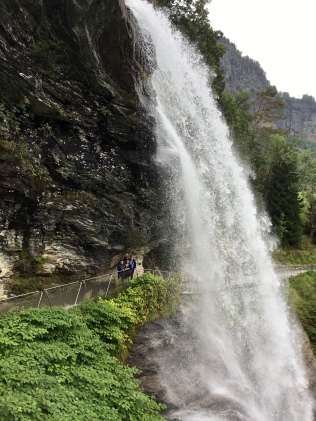 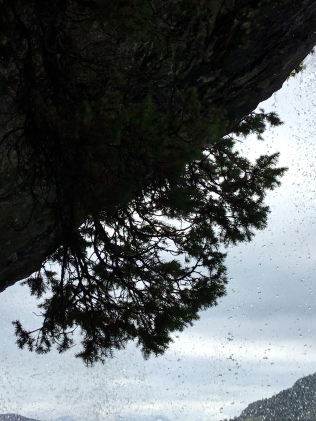 On descending, the police informed us that they believed the tour company was operating illegally. We were suspects, and the guide was to be arrested. It soon became a major investigation. We were separated and asked questions:”Did we know the guide–were we related to him?”; “How did we pay for the tour?”; “What proof did we have?”; “Why were we in Norway and for how long would we be there?” etc. Being the primary person in the group–my name was in the window of the van–I had to make a statement, recorded for trial. Yes, name and address and phone number. I was thinking the entire time–I am going to be on an Interpol list and lose my global entry pass. It was all so very formal, by the side of the road, and the process took two and a half hours. We were now famished, thirsty and a little stressed. We would not get to the fjord; our tour was over! Would we get reimbursed? How would we get back to the ship before it departed? Finally, the officers–who had been official but quite polite–told us they would call an area cab, but it would be awhile, since the driver was picking up grandchildren from school–yes, we were in a rural area. We would also bear the cost of the cab ride–$420. This would be an expensive day–a private tour guide, plus the cab fare.

Thankfully, a member of the tour company met us at the ship and paid the cab fare. They were legit, so we now wonder, what was that all about? We may never know, although I now speculate it had something to do with Randy–after all, he is the one who actually booked this tour.  Since we had a few hours remaining before the ship departed, we spent a lovely time in Bergen, walking the cobbled medieval streets of this one time major trade center as part of the Hanseatic League of European cities. Absolutely, it will be an adventure to remember! WEG