Today was an experiential travel day for us because you cannot fly from Quito to Cotacachi, Ecuador, and I had made no prior arrangements for the two plus hours of travel to reach Cotacachi from Quito. The folks at our Quito Hostal (hotel) were more than helpful. They made arrangements for the hotel taxi to take us to a bus station where we could buy tickets to Otavalo, which is a short distance from Cotacachi. Upon arriving in Otavalo, we could board another bus that would take us to Cotacachi, where our lodging for the next six nights was located.
We were impressed with our Quito hotel. It is family owned, and every employee is a family member. They were more than solicitous–we received first class treatment. The colonial home had been remodeled into a small hotel. Everything was modern and tastefully appointed, while retaining the charm of the original colonial home. I will nearly always choose this kind of establishment in an old town area over a modern chain hotel and rarely have I been disappointed. 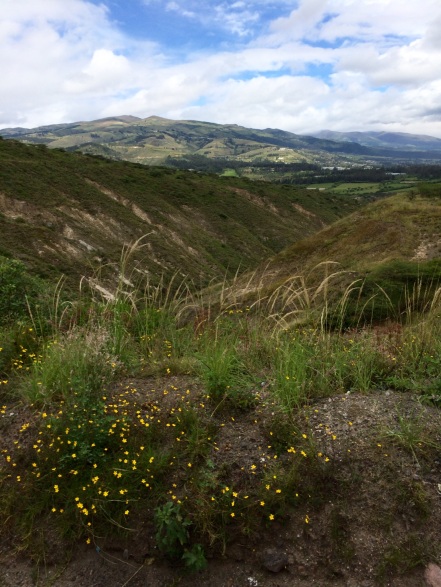 On the road to Otavala, Ecuador 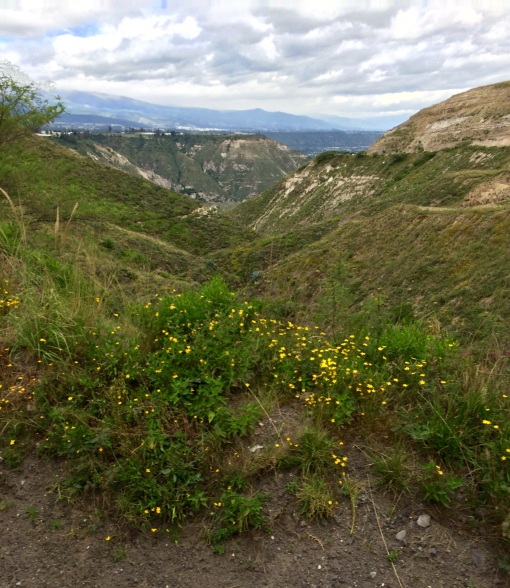 On the road to Otavala, Ecuador
The hotel taxi was cool–new, with embroidered headrests bearing the hotel name. The ride to the north bus terminal was about 30 minutes and the cost $10. The driver parked and took me to the ticket counter to make sure I purchased the correct ticket. He then took Kathy and me to the bus with our luggage and made sure it was safely packed and we were on the correct bus. Amazing! I gave him a generous tip, and he was overjoyed. The terminal was large, with buses coming in and out continually. Wonderful food stalls and shops lined the walkways. The bus was amazing. I admit, I haven’t been on a public bus in a while, but this bus had beautiful, comfortable seats; a built-in large screen TV showing American movies; a driver, accompanied by a “conductor” who received pre-paid tickets and/or cash for ticket purchases. Along the way, people would flag the bus, and it would make a quick rolling stop to pick them up, and then move on. Several times along the way, people in uniform would come on the bus selling drinks, ice cream, sandwiches, etc. The majestic scenery along the way was mesmerizing; the two hours passed quickly. Up and down the mountain side we traversed. Deep ravines with rushing water deep in the earth caught our attention, sometimes because the road ran right along side these deep cuts in the earth. All along the way the trees and flowers were in beautiful bloom.
We arrived in beautiful Otavalo, impressed with the cleanliness and well kept traditional Ecuadorian homes. Once off the bus, the conductor was waiting for us to give us our luggage, and he pointed me to the Cotacachi bus. We walked up, the luggage was secured below by the conductor, and as we stepped aboard, the bus was on its way. Did I tell you that our combined cost for the first bus tickets was $5.75 for the two-hour trip and our second tickets 75 cents for a thirty minute ride? 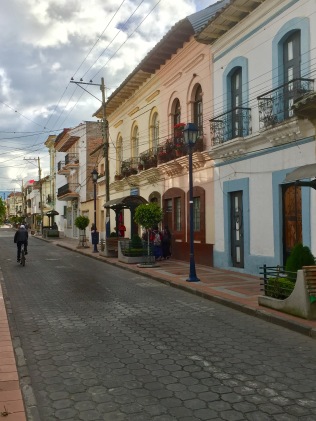 Cotacachi, Ecuador, street scene
Cotacachi is a charming small city nestled, at 8,000 feet, between two volcanoes. It is one of Ecuador’s eternal spring cities. It is 75F by day and 55F at night year round. Palm trees grow in the city’s squares. The streets are pavered, not paved, and the sidewalks are bricked. Our hotel is wonderful–another family-owned establishment–and our lodging comfortable and roomy. The owner already took Kathy to tour the gardens, visible from our room. Many fruit trees, vegetables, and herbs will provide for our morning breakfasts. We ate at a nearby restaurant for dinner, and my T-bone with fried plantain, French fries, avocado and pickled salad was really delicious–all for $11.50. No wonder so many American and German expatriates retire here. WEG

Like Loading...
By wgraumann in Adventure, Bus Travel in Ecuador, Cotacachi, Ecuador, Otavala, Ecuador, Uncategorized on May 30, 2017.
← Raw Beauty The Serenade →