The trees in Berlin are turning gold and red and maroon and yellow right before our eyes. It is lovely. Kathy and I spent quite some time in the Pergamon Museum while Allen, Rhonda and Sherlene spent time in the Kaiser Dom (Kaiser’s Cathedral detailed in yesterday’s blog), and Mike and Sandra whiled away the day in Potsdam, a small city on the outskirts of Berlin.

The Pergamon is one of five national museums on Museum Island on the River Spree just steps away from the Kaiser Dom. Kathy and I were awe-inspired from the moment we entered. Immediately we were on the Procession Way, built by King Nebuchadnezzar of ancient Babylon. The blue tile walls were laden with large lions in gold tile and lined both sides of the Procession Way. The King inscribed, “My name is Nebuchadnezzar and I am the King…” The Procession led to the Gate of Ishtar with the same blue tiles but overlaid with bulls and mythical creatures. Anyone approaching Babylon long ago would walk this way into the city and be impressed and fearful of the power of the King. Reassembled in the museum, it is impressive indeed. That was only the start–artifacts, statuary, stelae (large markers), palace walls and decorations from the ancient Hittites, Assyrians, Babylonians and Mesopotamians filled rooms. King Sennacherib of Assyria and of Old Testament Biblical fame was well represented with artifacts. We were impressed, and then we walked into the huge room that contained the largest ancient artifact contained in any museum, the Gate of Miletus, the columned and storied gate that led to the marketplace in that important ancient port city. The museum was a “wow” experience! 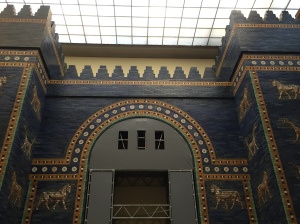 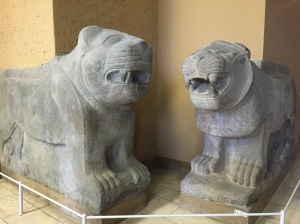 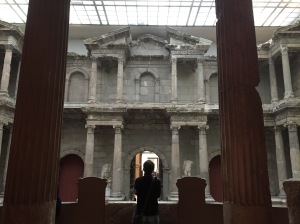 Mike and Sandra enjoyed their time in Potsdam. They spent much time in the beautiful Neu Schloss (New Palace), the summer home of the Kaiser. It is both opulent and massive. The gardens are a mile long and connect to other palaces. They walked the gardens, but after spending six hours, they had only scratched the surface. They realized that Potsdam is more than a day trip. However, their day was grand.

In the early evening, Allen, Rhonda, Sherlene, Kathy and I rejoined to explore the almost three mile long Kurfürstendamm shopping street. Tree-shaded and lined with upscale stores on both sides, it is a shopping mecca for Europe. At the end is the famous KaDeWe mega store. The second largest store in Europe, it has upscale interior shops set in a modern decor. Its gourmet floor is huge. We found it interesting that American brands, like Hershey’s Chocolate Mix, were three times more expensive than at home. Their Tex-Mex section was a hoot!

On our way home on the hop on-hop off bus, the hour stuck 6:00 PM. Immediately, the bus pulled over and the driver ordered us all out. The service stopped at 6:00 PM–no “ands, ifs or buts.” Stranded on the street, we were fortunate to see a cab that took us to our hotel. Another grand day in Berlin came to a close. WEG