What a day in Munich! Saturday, September 19, was the opening day of Munich’s 2015 Oktoberfest that will last through October 3. Since we were told the crowds were humongous, we opted to go later in the day and use a secondary train stop rather than the popular Theresienwiesen stop. It was a good choice.

With an open schedule in the morning, we visited the Schloss Nymphenburg, the Baroque palace on the outskirts of Munich that was the main summer residence of the former rulers of Bavaria, and is now a state historical site. The grounds were impressive; flowers surrounded man-made lakes where swans and wild geese swam above and large carp swam below. The palace was designed in an impressive array of inter-connected buildings that formed an oval, enclosing a beautiful park festooned with colorful floral plantings. The main entry gallery, the Great Hall, was stunning with its pastel-colored fresco paintings encased in elaborate baroque frames of gold and white. Huge crystal chandeliers hung from the frescoed ceiling. Ludwig II, “the mad King,” was baptized in this Great Hall. The rear gardens were even more impressive than the front gardens since clipped hedges, mass flower plantings in full bloom, statuary and fountains stretched as far as the eye could see. 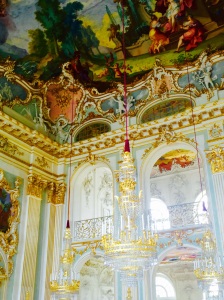 As we wandered the palace, we stumbled upon the rooms that contained the royal carriages through the centuries. The Marstallmuseum (Museum of Carriages and Sleighs in the former Royal Stables) houses a collection of historic state coaches, ceremonial sleighs and riding equipment. The carriage of Emperor Charles VII was gold and massive, exuding strength while the golden carriage of Ludwig II was ornate and whimsical, portraying his love of opera. What surprised us most, however, was the collection of horse-drawn sleighs. Some were constructed of ornate wood with Bavarian paintings on the side. Others were gold with elaborate golden decorations and lamps. The seats were fur-lined. We were able to observe archivists meticulously restoring one sleigh. After walking through the porcelain gallery containing the table settings and decorative arts that surrounded the royalty on a daily basis, we headed off to the Oktoberfest grounds, the Theresienwiesen.

It was easy to know where to go since thousands were headed in the same direction. The vast majority of folks were wearing the lederhosen (men) or dirndls (women) that is traditional Bavarian dress. The Oktoberfest was boisterous and packed with people. We went into a couple of the tents (that hold up to ten thousand people) to hear the bands playing “oompa” music and watch the “Gemütlichkeit” (camaraderie, fellowship, warmth and friendship) of the singing crowds. “Ein prosit, ein prosit, Gemütlichkeit” and our day at the Oktoberfest was done. We spent the evening at the famous beer and Bavarian food house, the Hofbrauhaus eating crisp pork shank and potato dumplings along with the smooth Hofbrau beer (HB). We sat in the rustically ornate and huge upper dining room, as the beer garden and lower rustic rooms were packed. The band, dressed in Bavarian clothing, played as we ate. It was early to bed since the Bergs are flying to Rome early in the morning to catch their scheduled plane home. And, good news, Allen is out of the hospital, and plans are being made for Allen and Rhonda’s return home. WEG – Saturday, September 19, 2015

Like Loading...
By wgraumann in Adventure, European Adventures 2015, Germany, Munich, Oktoberfest 2015, Scloss Nymphenburg on September 20, 2015.
← Hospital and Travel Difficulties Up and Away →