Our Sound of Music day in Salzburg, Austria, was fantastic. But that was not the big travel news and experience of the day; what experiences we have had!

First, a fuller explanation of Allen’s story about going into the hospital in Salzburg. His situation with the prostate condition worsened while at the hotel in Salzburg. In the late evening, Rhonda and I got him to the university hospital for testing with the hope of getting permission for him to travel back home to the U.S. (I blogged about that earlier.) Allen did not receive permission to travel. Instead, the medical professionals wanted to admit him to the hospital immediately because his blood count was acutely high. Understandably, Allen was hesitant. This was something completely unexpected and out of his expertise, being in a foreign country and with doctors he did not know. After consulting with his medical office in Tomball, the decision was made for him to be admitted to the university’s urological hospital wing in Salzburg. The admission process was quick and easy. When we arrived at the hospital by taxi, I thankfully saw someone who was being brought out of the hospital on a stretcher. I promptly used the opportunity to enter through the same automatic door that closed behind me. Thankfully, I had made it inside, because the automatic door could be opened only with a pass card from the outside. When I saw Allen and Rhonda approach the entry, I was able to activate the door from the inside that permitted them to gain entrance. Now inside the hospital entry, we saw no one; it was dark and silent. A young intern eventually walked in and appeared surprised to see us. He summoned a doctor. It took Rhonda some explaining to do before the doctor could understand why we were there. Once that was successfully communicated, Allen went for testing. About an hour and a half later, someone from the hospital came to escort Rhonda and me to Allen’s room where a very efficient and pleasant nurse met Allen to explain everything about his room and what to expect next. We were impressed with how quickly everything transpired. Other than medications, there were no forms for Allen to fill out and no payments required. The next day, a hospital representative came by to require payment; the fee was quite reasonable. Allen is steadily improving and, God willing, will be able to be released from the hospital and given permission to travel home in a few days. Rhonda has a safe, comfortable hotel room and spends time with Allen during the day. Last night, Dan and I went to say “goodbye” to Allen, and this morning, Charlotte, Dan, Kathy and I said “goodbye” to Rhonda. Allen and Rhonda are being helped by the travel insurance personnel who will arrange for their trip home.

Dan, Charlotte, Kathy, and I are traveling on to Munich where the Berg’s will catch their scheduled plane home via Munich to Rome. Kathy and I will then continue our adventure alone.

If it were only that easy! Travel always has the unexpected, and seasoned travelers know it comes with the territory and you must go with the flow. The refugee/immigrant crisis in Europe caught up with us in Salzburg. We learned that all trains into Germany were cancelled. Hotlines were of little help. It was “every man for himself.” A doctor at the hospital, in an offhand conversation about our plans to go to the Oktoberfest in Munich, mentioned that he had tickets to the Oktoberfest. Since the rail lines into Germany were closed, he planned to drive to the border and go across to the small German city of Freilassing where he would catch a German train to Munich. With that tip in mind, we called a taxi to take us to that German city. We all had to go through border checks with passports examined to make sure we were not illegally entering the country. We saw army personnel standing along the waterways to make sure no one crossed there. When we finally arrived at the bahnhoff (rail station), we went to the ticket office and found out that our original tickets from Salzburg would be accepted on a German train. What a relief! The train station was filled with refugees/immigrants. There were social agencies on hand to help. Upon inquiry, we were informed that people already inside German borders were being processed and resettled throughout Germany. We were told nearly all the refugees/immigrants wanted to come to Germany and not other European countries, and so border controls were initiated to regulate the flow. Our observations were that families fleeing war (refugees) were the minority and young men seeking employment (immigrants) were the majority.

A refugee family asleep on the floor of the train station in the border town of Freilassing, Germany

Assistance is provided to the refugees who have come to the train station in the small border town of Freilassing, Germany

Police cars parked outside the train station in Freilassing, Germany, as they manage the influx of refugees/immigrants who want to enter Germany

Now, back to the Original Sound of Music tour that all of us, but Allen, took. It was a lovely day seeing the places in which the movie was filmed. We saw the homes (rear of one home and front of another) where Baron Von Trapp and his family lived, the gazebo where his oldest daughter fell in love, the bridges over which the children played and sang, the beautiful Mirabell Gardens where several of the scenes were shot, and the church in which the wedding of the Baron and Maria took place. We were able to witness a funeral in progress at the church. A choir was singing, and the people in attendance were finely dressed in traditional Tyrolean clothing. The white horse-drawn funeral carriage outside was festooned in brilliant flowers and led by a funeral band clothed in red Tyrolean clothes with black hats. As we drove, we were in the beautiful mountain and lake district of Austria where the mountains ring soft baby blue lakes. Our guide pointed out the hotel frequented by the Bill Gates family and the Red Bull (the drink that has made the owner the second richest person in Austria) campus headquarters building that was framed in glass. The huge bulls charging out of one building into a lake, with water flowing out of their mouths, was eye-catching. This tour, coming amidst all the other travel issues, was a spirit refresher. WEG – Friday, September 18, 2015 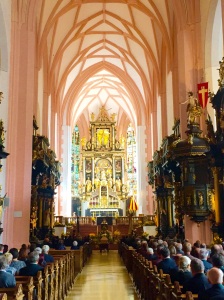 The beautiful church in Mondsee, Austria, in which the wedding between Captain von Trapp and Maria was filmed in the movie, “The Sound of Music.”

Salzburg’s beautiful Mirabell Gardens in which many scenes from “The Sound of Music” were filmed.