It was a restful day on purpose, since Kathy crawled into bed the night before at 2:30 A.M. I used to work late hours and so staying up late is not so hard on me, but my wife is an “early to bed, early to rise” type of person, and so I walked softly in the morning and let her sleep. We had stayed up late due to the organ concert lasting until midnight and then going to a German restaurant for early morning beer. We really like this restaurant on our street. It is so German feeling with wood floors and wide-planked wood and plaster walls and wood beam ceilings with cozy eating areas around an old-fashioned bar with ancient beer taps for dunkel, rot, and weiss beer. It is quiet; Germans speak in soft tones, even in a beer hall. 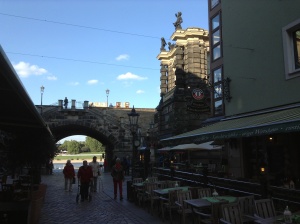 Our favorite restaurant, the Kutscherschanke, just outside our apartment door on the River Elbe

The street where our apartment hotel is located is the oldest street in Dresden. The old city grew up around it. It is narrow and cobblestoned and ten restaurants with outdoor seating areas covered with canopies and outdoor heating make the passageway even narrower. The street runs from the Elbe River Promenade to the Frauenkirche, only about 200 feet. It is a favorite walkway for tourist groups and locals because of its good eating and drinking establishments, and so it is crowded from morning until early morning. The doorway to our apartment is right in the middle. The outside street singers are really good and, if we want to hear them, we only need open our windows. So far, it has been opera, country/western, and broadway for singing and classical for the brass and string ensemble. I told Kathy that we don’t need radio and there are no commercials. 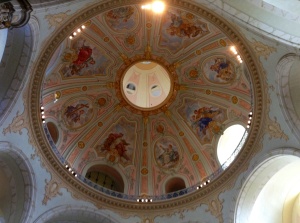 The frescoed dome of the Frauenkirche just steps from our apartment

One section of the tiered balconies of the Frauenkirche

This afternoon we happened upon a recent excavation in the Old Town, on the square of the Frauenkirche. Old photos before WWII showed a cluster of housing. After the Allied firebombing shortly before the end of the war that killed over 40,000 civilians, this area was covered over. Now it is being excavated and has uncovered well preserved foundations and walls. Most such sites are meticulously restored, but no decision on this site has been determined. It gives pause to think that so long after the war, restoration is still continuing. WEG 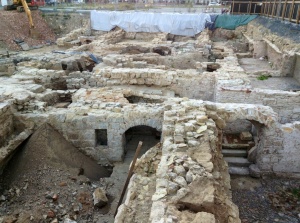