Home » Uncategorized » A Day of Culture

A Day of Culture

Dresden is one of the art capitals of Europe. Its buildings are impressive, even stunning. Each square in the Old Town is powerful, and the expanse allows the buildings, fountains, and statuary to stand out. The architecture is Baroque, outside and inside, and so, the Old Town is quite unified in design. The stones are dark with age and some from the firebombing of World War II; however, gold pediments and crosses stand atop stately palaces and churches.

Today, Kathy and I viewed the Old Masters’ Gallery in the Zwinger Palace. The Palace itself is a work of art, built symmetrically in the Baroque style around a massive square, but today, we were interested in the paintings of Cranach, Durer, Tintoretto, Raphael, El Greco, Titian, Van Eyck, Vermeer, Van Dyke, and Caravaggio that filled the museum.

In the evening, we attended a progressive organ concert held in the Frauenkirche (Church of Our Lady–Lutheran), the Kreuzkirke (Church of the Cross–Lutheran), and the Dresdener Kathedral (Catholic). If you like organ music played in beautiful churches on large pipe organs, and I do, it was three hours of bliss.

While both the Kreuzkirke and the Kathedral are large and impressive on the exterior with tall Baroque towers, it is the Frauenkirche that is the emblem of Dresden, and for good reason. It is a massive Baroque dome with an equally impressive Baroque interior of pink, white and gold. It has seven levels for seating with intricate balconies and a painted and layered dome. It was built by a staunch Lutheran populace to show their Catholic monarch that they could.

I’m not saying that I am “arted out” as we go way past the midnight hour, but I am definitely “worn out.” We are ending our day in a quaint German restaurant with a glass of dunkel (dark–Kathy) and weisse (light/white–Wayne) beer. WEG 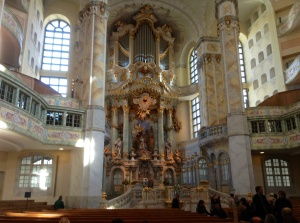 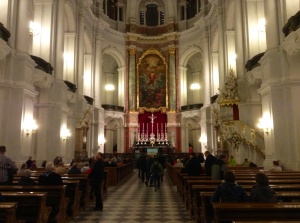