Hezekiah knew the Assyrian army was marching toward Jerusalem. He had to act quickly to safeguard the city’s water supply. Deploying two huge crews of workers, he instructed one crew to dig from point A to point B and the other crew to dig from point C to point B. Working from opposite directions they met in the middle. When finished they had dug a water channel 300 feet below the surface to connect the Gihon Spring in the Kidron Valley to the Pool of Siloam in the middle of the city. It was a major feat but it guaranteed that Jerusalem would have an adequate and defensible source of water. Today, one could walk the tunnel still flowing with water and, as they say, “Walk on Water.”  Those who did not prefer to get wet could walk the “dry tunnel,” dug by the Jebusites over 300 years earlier. This tunnel was found by General Joab who invaded the Jebusite city on the instructions of King David. Overpowering the Jebusite city, King David named the city Jerusalem—the City of David—and began a large building program. We saw remnants of David’s palace and government offices. Recent discoveries of letters with the official signite have contained names and events recorded in the Bible, thus authenticating the Scripture. Remarkable! 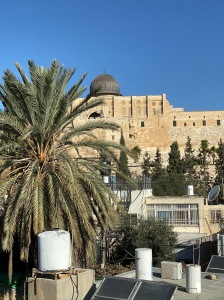 The Israelis Museum is a marvel, containing among other items, a 1/50 scale model of Jerusalem at the time of Jesus. It was a tremendous visual. So was the view from a special platform of present day Jerusalem. Our guide pointed out the movement of Jesus during Passion Week—arrest, trial, crucifixion, burial and resurrection. It was amazing to see all the Biblical accounts spring to life and realize the close proximity of all these events.

Model of Jerusalem at Jesus’ Time

Visiting the Church of St. Peter in Gallicantu, we stood in the courtyard where Peter denied Jesus. The church was built on the site of the home of temple high priest, Caiphas, where Jesus was tried, mocked and imprisoned. We stood in the jail cell and viewed the steps down toward the city on which Jesus walked after the trial as He made His way to Pontius Pilate who would allow Jesus to be crucified. Touching to say the least. 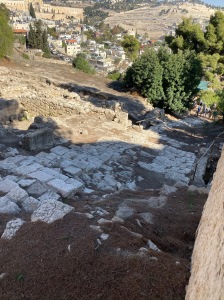 Our day ended at the the Place of the Skull, where scripture says Jesus was crucified. The rocks in the cliff actually have a formation that looks like a skull, with sunken eyes, no less. Nearby is a cave that served as the grave of a wealthy family. The Bible says that Joseph of Arimathea, a wealthy man, took Jesus’ body and interred it in his burial cave. Scholars debate which of two places is the actually place of crucifixion, but this site seemed so authentic to me. Our group had a very moving communion service in an outdoor chapel in the cool early evening air in a spot between the Place of the Skull and the burial cave. Tears were shed and hearts were touched! He died for me, and He lives for me. WEG

Worship Service with Holy Communion at the Garden Tomb 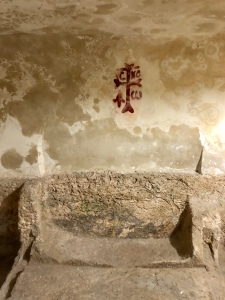 Like Loading...
By wgraumann in Uncategorized on November 20, 2019.
← A Soul-Refreshing Day Betrayest Thou Me With a Kiss →