Home » Uncategorized » In the Heart of Bibleland

In the Heart of Bibleland

Standing on Mt. Carmel—it was a climb worth every step—one looks west to the Mediterranean Sea; east to Nazareth and Cana of Galilee and south to Megiddo and Caesarea.  All of Israel is jam-packed with history, both religious and secular. However, in the north of Israel, Bible stories come alive in this heart of the northern Bibleland. Mt. Carmel is where the great prophet of old, Elijah, challenged evil King Ahab and Queen Jezebel and their worship of the old Canaanite god Baal. He ridiculed 450 Baal priests in a worship duel where the God of Israel came down in fire to burn up Elijah’s worship offering; whereas, the Baal priests only received silence from heaven as they called upon Baal to burn their offering.

Nazareth was Jesus’ childhood home and the majestic Church of the Annunciation stands on the spot where the angel Gabriel told Mary she was to be the Mother of Jesus. We were struck with the multitudes of faithful Christians from around the world who filed past the House of the Holy Family inside the church walls. Kneeling and praying, singing or sitting in quiet solitude, the multicultural and multi-ethnicity of the Christian Church was on glorious display in this reverent space. Awesome falls amazingly short of describing the experience. 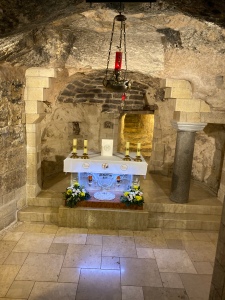 Just south is Megiddo and its ruins. Situated in the most strategic intersection between Egypt and Mesopotamia, whoever controlled Megiddo gained enormous financial and military clout. Because of this, Megiddo has several thousand years of history before King Solomon ruled the city and built Salomon’s gates, now being uncovered and restored near the even more ancient Canaanite gates to the city. In fact, the city has 26 layers of ruins, let that sink in—26 layers of antiquity! Here, the New Testament book of Revelations speaks of the final battle between good and evil under the name Armageddon. We walked past the ruins of King Ahab’s (Ahab and Jezebel fame) horse stables and entered the deep shaft subterranean water system dug during his reign. Incredible. We came out of the system at the base of Mount Carmel exhausted and fulfilled.

In Megiddo, we observe location of emergency storage of grain. 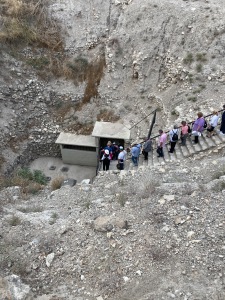 In Megiddo, our group prepares to view the underground water system.

The day began at awesome Caesarea. Extensive and well preserved ruins of this most important Mediterranean city remain—the theatre, the hippodrome (horse races), the port, portions of the palace, stone walls and the water aqueduct with its stone arches remain to this day. I stood where the Apostle Paul made his appeal to go for trial before Caesar in Rome that would eventually give him a martyr’s death. Moving indeed! 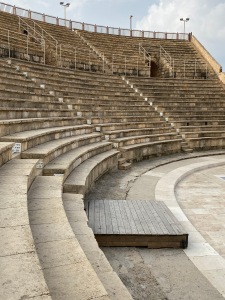 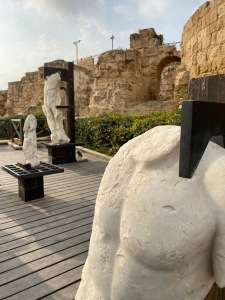 I could say it was a full day of activity, but I prefer a fulfilling day descriptor. And to top it all off—the Mediterranean food we were served has been gasp inspiring, which simply means we are all going to bed full! WEG 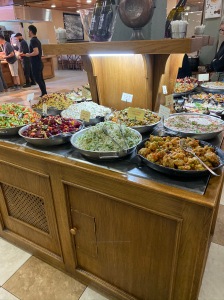 Only a tiny sampling of the delicious Mediterranean foods we are enjoying.