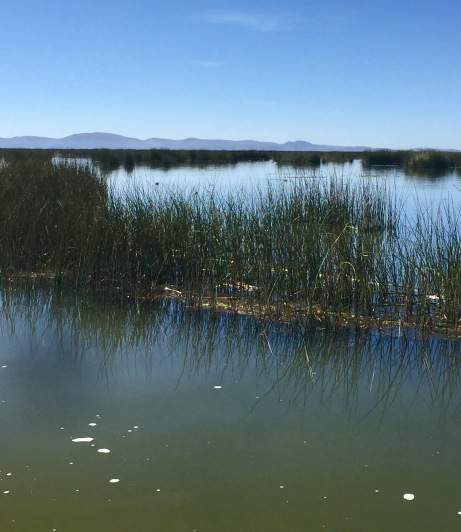 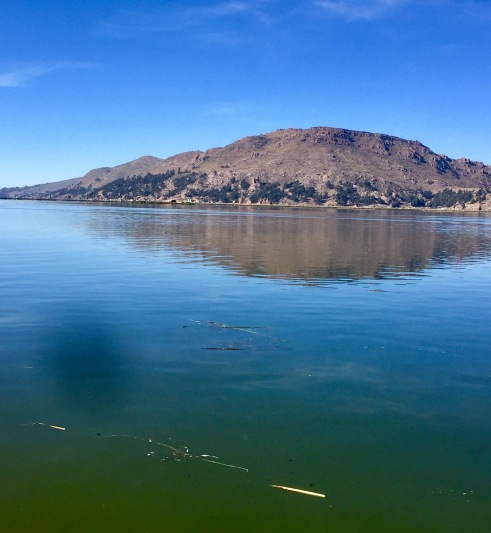 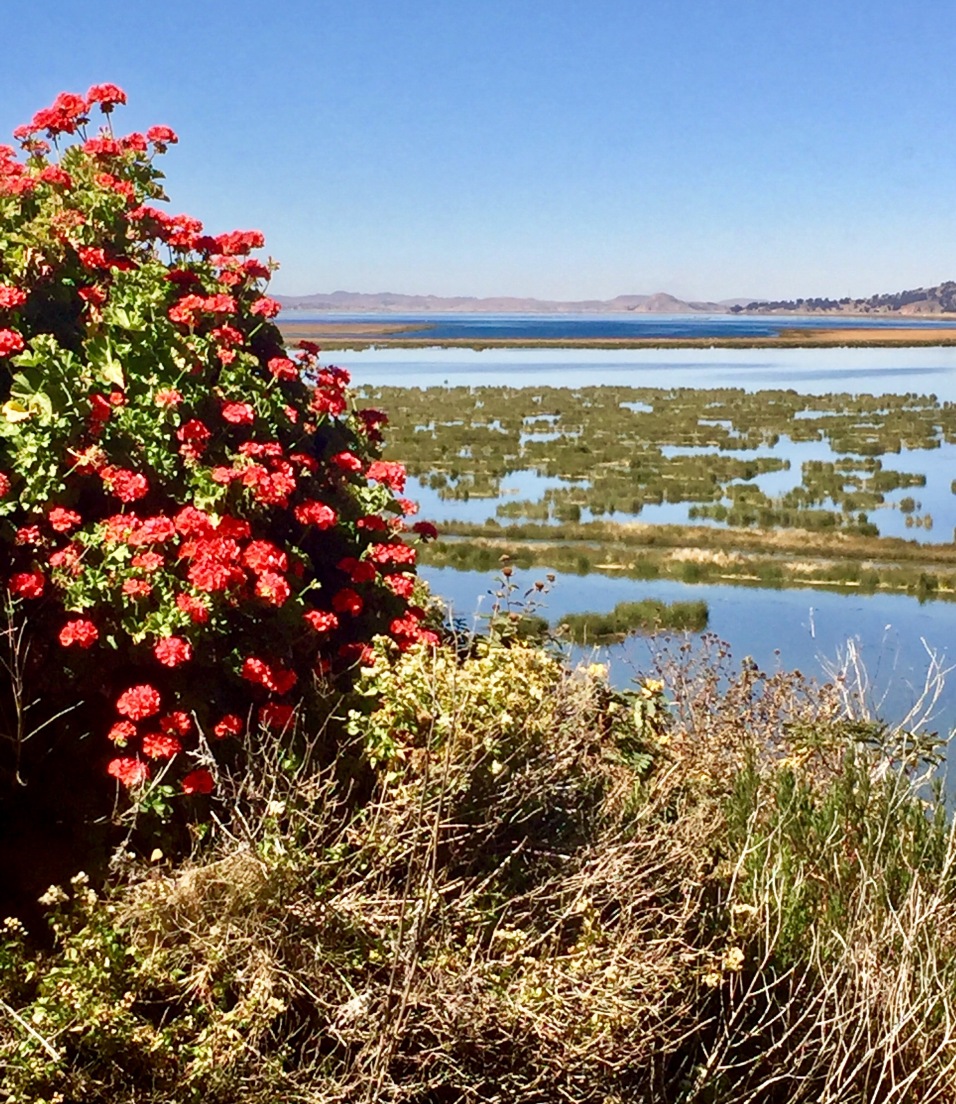 We had no idea what would lie in store for us today on Lake Titicaca, South America’s largest lake that lies between Bolivia and Peru. The lake is beautiful with reeds growing in the shallows along the shore and ringed with low lying hills. At 12,500 feet above sea level, Lake Titicaca is the highest navigable lake in the world. It is 103 miles in length and 27 miles in width and its deepest point is almost 900 feet. Big lake! 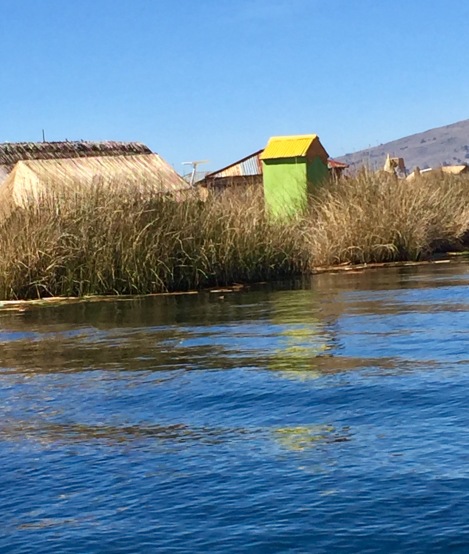 The Floating Islands of the Uros people of Lake Titicaca 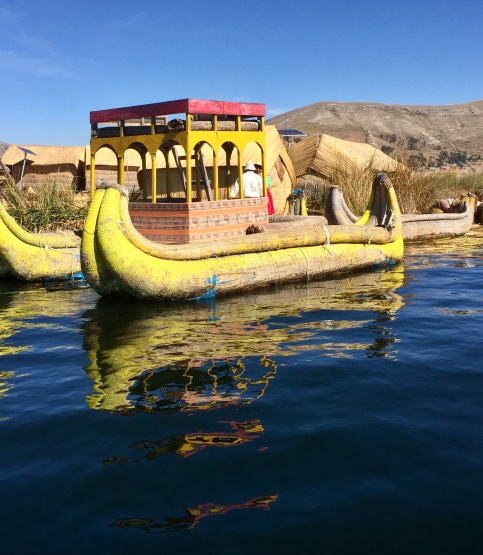 The Boat of the Uros People made of Tortola Reeds 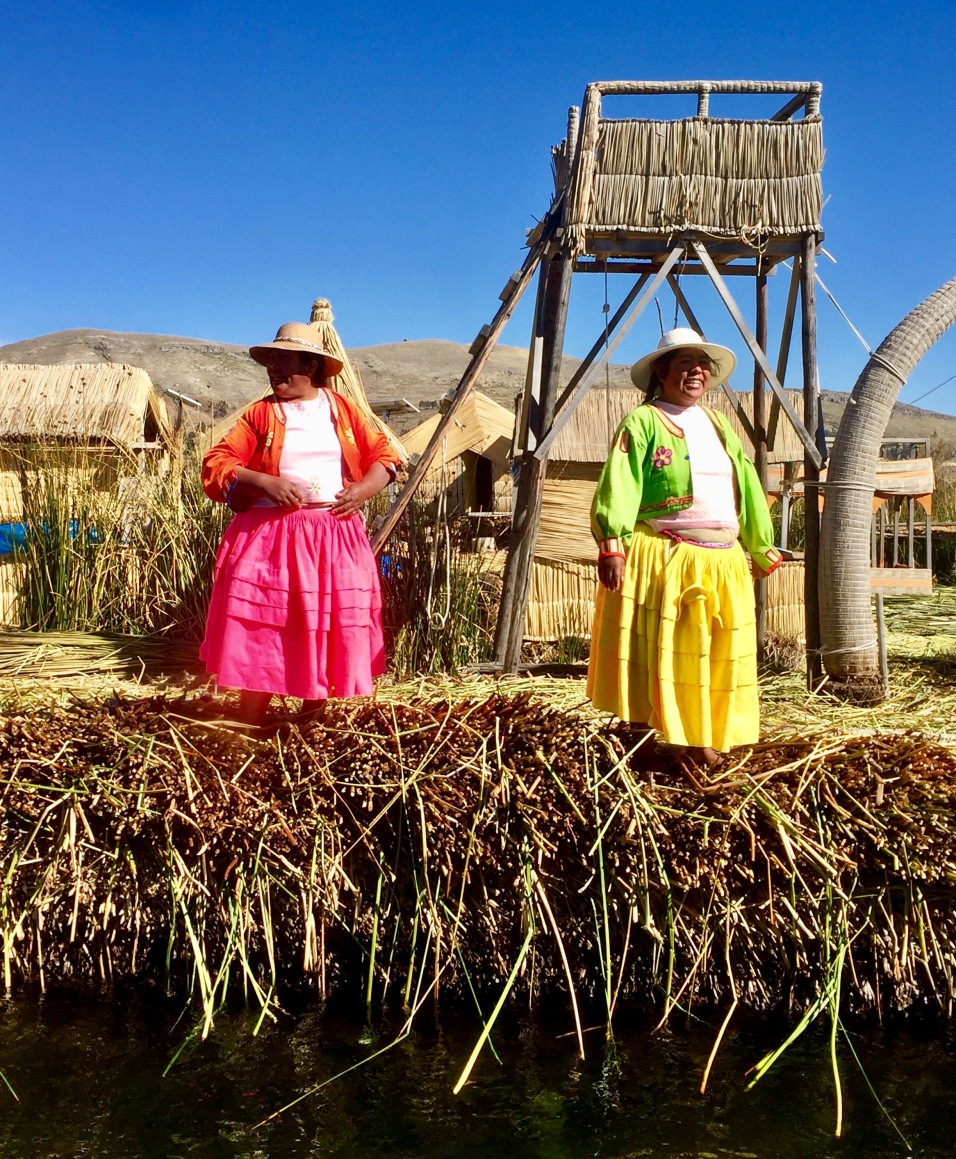 The Uros People of the Floating Islands of Lake Titicaca

We took a boat ride on the lake from our hotel’s dock. We followed a channel cut through the reeds. Our destination was the floating islands of Lake Titicaca. We were immediately blown away when we approached the islands. They are indeed floating. In fact, they are anchored so that they will not float away into the deeper lake. When we got off our boat onto one of the islands, we were greeted by the inhabitants dressed in native dress and shouting out welcomes in the native language of the Uros people. 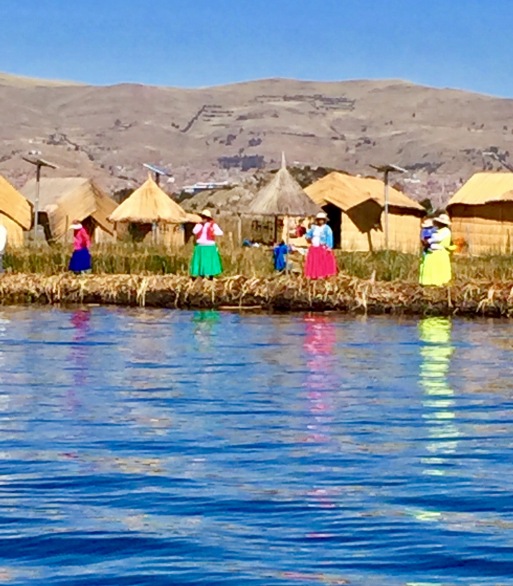 The Uros People who live on the Floating Islands of Lake Titicaca, Peru 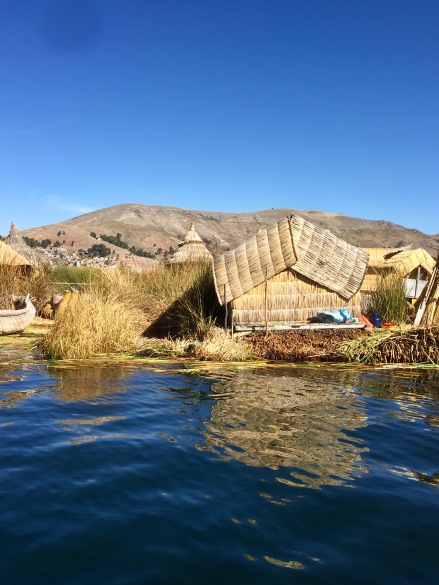 The best way to describe walking on the floating islands (there are many in close proximity) is to say it’s like walking on a soft mattress. Try doing that for several hours. The islands are covered in small homes built out of the reeds along the shore that our boat had passed through. Some have rounded and pitched roofs and others are “tepee” like. Everything is made of reeds–furniture, beds, flooring–even the island’s earth is of reeds. One of the women invited Kathy and me into her home where she insisted that Kathy try on some of her clothing. Fun! Kathy and I agreed that this was the most intriguing place we have ever visited in all our travels. 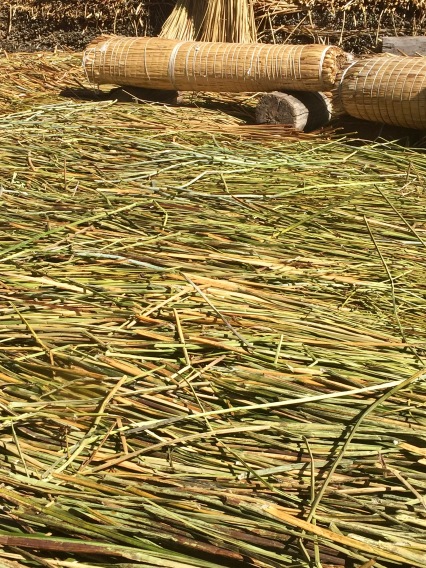 Compacted beds of Tortola Reeds on the Floating Islands of Lake Titicaca, Peru 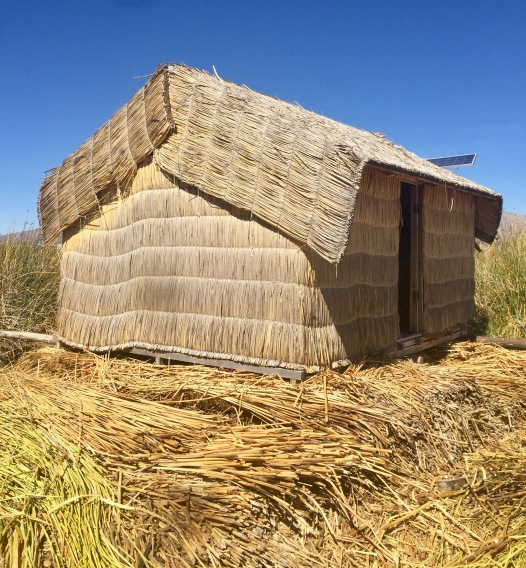 Home made of Tortola reeds on Floating Island of Lake Titicaca, Peru 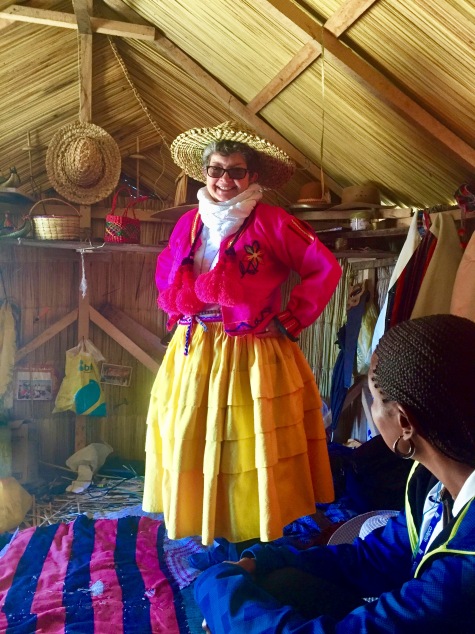 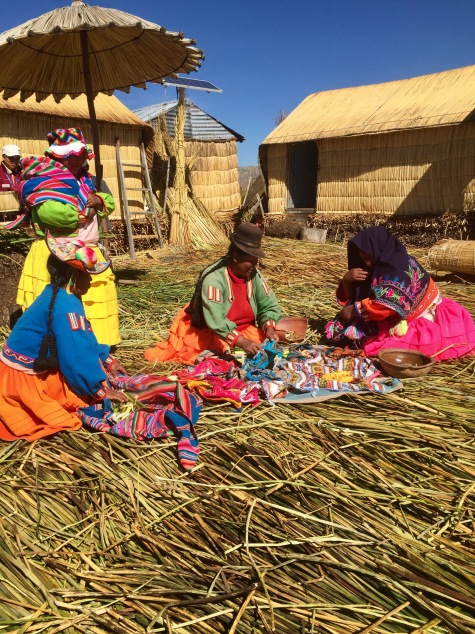 Why and how did these islands come about? Five hundred years ago the Incas were invading the lake’s native peoples in an attempt to bring them under the control of the empire. The people in this part of the lake realized that their future was threatened, and so they escaped by boat into the lake. After living in the boats and realizing they had no place to go, they noticed that mounds of tortora reed roots that had dried out in the dry season were floating in the lake. They tied the floating roots together and covered them with layers of reeds. Then, they constructed their housing on top using the reeds. This tradition has continued until today. However, maintaining the islands is labor intensive, and we were told that in the next twenty years, the islands will likely no longer be what we were able to experience today, since children are going to college never to return. The floating islands will probably become government maintained in the future with hired actors to welcome the tourists. 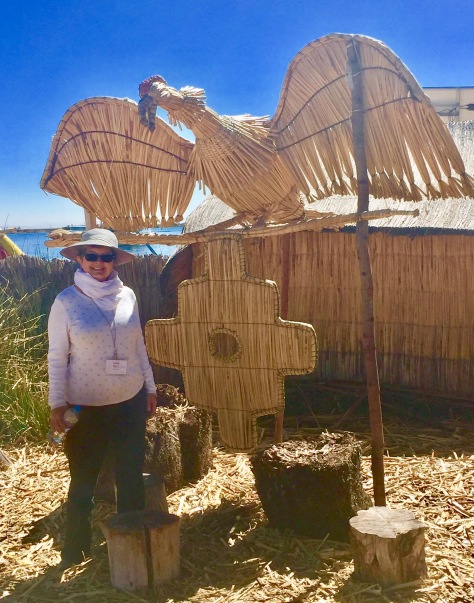 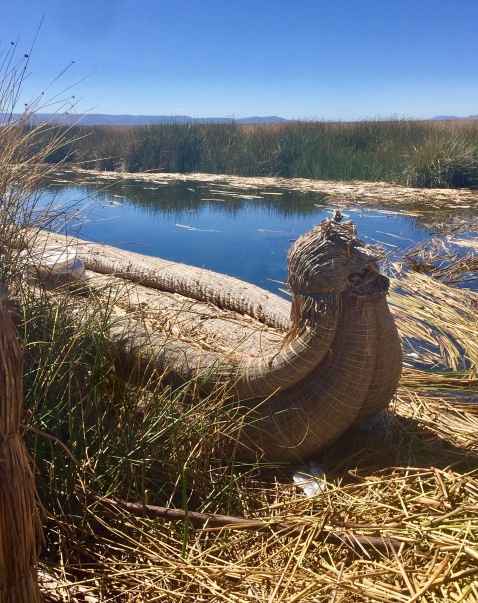 Boat made of Tortola reeds by the Uros people of Lake Titicaca, Peru

All of a sudden a large flock of flamingos flew overhead, portending the large migration of this bird from Chile to the lake. Lake Titicaca was an unexpected surprise that we enjoyed immensely. WEG