Our trip has been basically error and stress free, nearly everything working wonderfully as planned. Monday morning was different. We needed to take our rent car back to the rental company in Salisbury. We left with plenty of time in order to get gas, return the car and get a cab to the train station. We dropped Kathy and Rhonda at the train station with the luggage and headed to the gas station as indicated on the GPS (SAT navigation in Europe). Things started to go wrong when we arrived at the filling station and found it boarded up for renovations. Allen quickly reprogrammed the GPS for a new station, and off we went. It was on a round-about and we entered, but the gas tank was on the wrong side for the traffic pattern. I finally repositioned to get a gas pump and, in order to save time, Allen gave me his credit card to pay while he reprogrammed the GPS to the car rental agency. We have never had to show ID’s on this trip, except this time. I am obviously not Allen, and so they would not accept payment (Allen owes me money since I have been paying for the rentals, and that is why he wanted to use his credit card), so I had to run out and get Allen to come into the station. We finally were on our way, but the GPS got confused on the round-about and sent us the wrong way. Whoops! In the recalculating, the GPS got us into another round-about, but in the wrong lane. The traffic was so heavy I could not get over, and now we were in another wrong direction in very heavy traffic. After twenty minutes, we were finally back to the right direction and still one hour to get to the train station. However, we could not find the car rental agency and the GPS was no help. We called to the rental agency, and no answer; we stopped for directions several times and were sent in the wrong direction; we drove up and down streets since we knew we were close, all to no avail. Allen reprogrammed the GPS, and finally it found the Europcar rental agency. Off we went, only to find that it took us to the train station. Allen said we should tell our wives to buy new tickets since we would not make the train, and then I saw the taxi cabs and yelled, “Ask a cab driver to lead us to the Europcar agency.” Sure enough, that worked. We had the cab wait while I ran in to return the car keys and told the agent that we had nine minutes to make our train. The guy was quick, but the printer was not working properly. I begged, and he hand-wrote a signed statement that we had turned in the car. Off we went in the cab to the train station, but the road was blocked by a truck backing out of a warehouse. The truck finally moved, and then we came behind another truck doing the same thing. The cab driver said, “You guys can’t get a break.” Finally, we were off and, at last, arrived at the train station. Kathy and Rhonda informed us that the train had been delayed by several minutes. Through the turnstiles we rushed and to the train platform, just in time to catch the train. It was overcrowded, and Allen and I had to stand. We had one train transfer in order to get to Oxford. The new train was also delayed and so, with time to spare, Kathy went to the restroom. Unfortunately, the train arrived on time, and Kathy was not waiting at the platform. Allen and Rhonda took our luggage onto the train while I ran to the restroom area, yelling for Kathy. What panic as she and I ran to the train, with an impatient conductor forcing us onto the last car while Allen and Rhonda rode in the first car. I was exhausted from a stressful day driving on the opposite side of the road, maneuvering around round-abouts in heavy traffic in a Mercedes that drove differently than I am used to driving. Looking back, we realized that, in spite of it all, we made it to Oxford in one piece and as planned. God be praised! 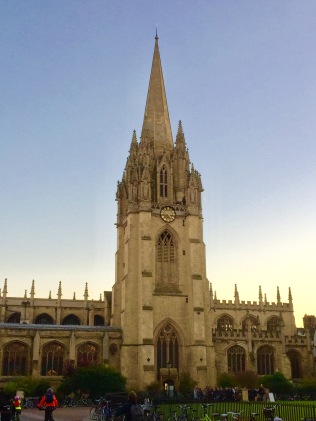 Oxford is elegant and the architecture is stunning. We walked through the various colleges of Oxford University. Basically, the university is the city of Oxford. All of a sudden, our morning seemed far away. Our evening meal in an English Pub was grand. WEG