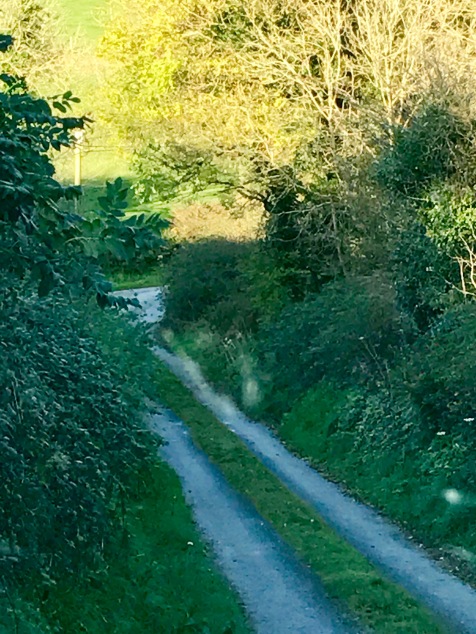 Allen set our GPS to avoid toll roads in Ireland. In spite of the fact that he has a generous heart and would give the shirt off his back to help someone, I joked that he was being a tight wad. The result today as we drove the Dingle Peninsula, one of Ireland’s beautiful road trips, was that our GPS took us on a very remote drive. We were shocked at first, then amused. We were literally driving on a rut road, so narrow that the bushes on both sides scratched at the sides of the car. On and on we went, bumping here and there, laughing and wondering when it would come to an end. We could see the ocean below us. We were so alone and hoped nothing would happen to our car in such a remote place. All of a sudden, our GPS blurted out, “Light traffic area.” Rhonda joked, “She’s lucky she’s not a real person (the GPS) or I would choke her!”  Quickly, our laughing stopped, as a large truck approached us heading toward us.  There was no way we could turn around and I was not about to back up. Stand off. Soon the truck flashed its lights and backed up. We moved forward and found a small place to pull over so that the truck could squeeze by on the other side. It was an experience we will not forget! 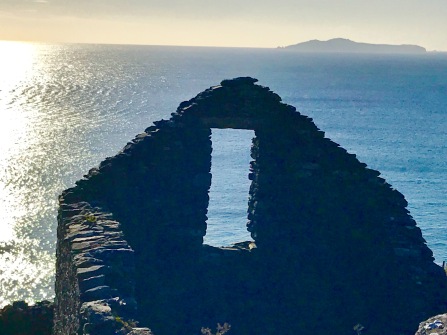 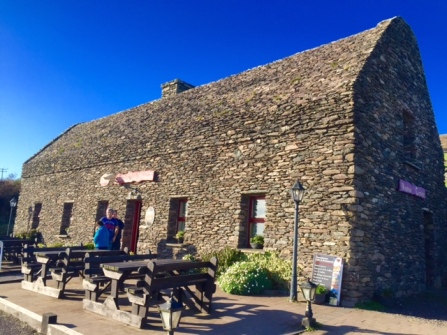 The Dingle Peninsula is a beautiful place, surrounded as it is by the icy blue waters of the Atlantic Ocean. Mountainous with deep green valleys filled with sheep and cattle, the drive circles and criss crosses the entire peninsula. We found the Wild Atlantic Way, a portion of the drive, contained marvelous scenery. We explored the 2500 year old ruins of a fort perched on cliffs overlooking the ocean. It was a grand road trip.

The evening found us in Killarney. We explored some of the city and ended up eating at a restaurant owned by an area fishing fleet. All the fish served was fresh that day and we had trouble deciding what to order. I could not resist the squid taken from Dingle Bay. Delicious! We realized that we have eaten much seafood recently, and appreciated it immensely. WEG