Glory of a By-Gone Era 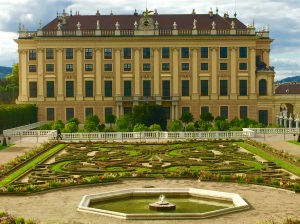 The Royal Imperial Habsburg’s ruled the Holy Roman Empire and then the Austro-Hungarian Empire. They were industrious, hard working, generally frugal and duty-bound. Emperor Franz Joseph said, “When you have worked until you are exhausted, you have had a good day.” He practiced what he preached, waking at 4 AM for morning prayer and then working 16 hours straight. He slept in his grand palaces on a hard iron framed bed in simple circumstances. 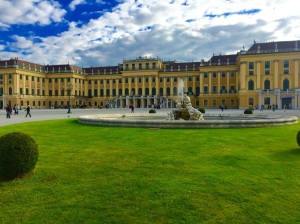 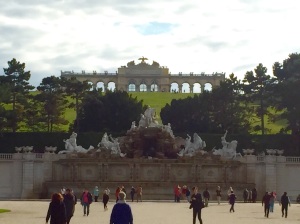 Vienna’s Glorietta in the gardens of the Schönbrunn Palace

As we toured the Schloss Schönbrunn, the Imperial Summer Palace, we walked through beauty and history. Gold and white rooms with huge chandeliers and porcelain fire stoves, with beautiful paintings of Habsburg historic events and family members went on without end. After all, there are over 1,400 rooms in the palace complex. Silk wall-coverings and Belgium tapestries adorned others. The magnificent ballroom with frescoed ceilings and crystal glass mirrors held many important world events, including the meeting of JFK and Premiere Khrushchev in the 1960s. Empress Maria Theresa married off her daughters to secure the Habsburg reign. One, Marie Antoinette, died at the guillotine during the French Revolution. The Empress said that she only hoped that the daughters would do their duty, take care of their husbands and save their souls–whether they were happy or not did not matter. The Habsburg reign came to an end at the conclusion of World War I, since the Empire was a part of the defeated Axis powers. All the palaces became state museums. 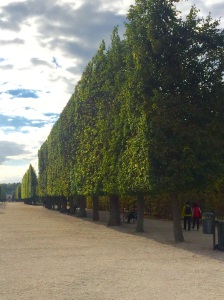 The gardens of the Schönbrunn Palace 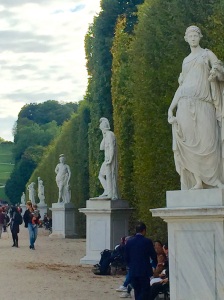 Statuary in the gardens of the Schönbrunn Palace

The exterior gardens of the Schönbrunn are gigantic and spectacular. A hedge and flower maze surrounded by a long arbor adorn one side of the palace while the opposite side hosts a rose arbor and garden with fountains. The rear gardens reveal magnificent flower design plantings lined with statuary and sheered hedges. Fountains dance in the gardens overseen by the amazing Gloriette, a white marble fountain with statuary at the base rising up to a masterful building silhouette on the hill above. Truly, this is one of the most wonderful gardens in the world. 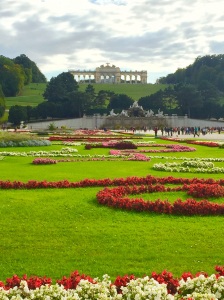 Kathy and I are proud of our ability to maneuver with public transportation. Today, without map or help, we moved through Vienna like pros.
WEG – Sunday, September 27, 2015