Home » Balzano » Worth the Effort

Arriving in Bozen/Balzano in the South Tyrol is difficult on a weekend when you want to rent a car. This is a different place for many reasons. Time moves more slowly here and German is predominant, even though this is Italy. Being a weekend, the car rental agencies close by 3:30 on Friday and do not open again until Monday morning. This is a traditional place and weekends are for family. Since we arrived by train, we needed to quickly hop a taxi to the regional airport, since this is the only place where a car can be rented. That meant we needed to find a place to garage the cars (we needed two–no large cars or minivans or SUV’s–for our Sunday drive). Furthermore, since this was the weekend of a large bicycle tour/race, spaces were limited. We managed to get everything done, with some effort.

It was worth it! Our drive into the Dolomites was relaxing, and the scenery was “lovely and dramatic.” The kelly green hills reached up to heavy forests which pushed up against jagged mountain peaks. The Dolomites are noted for these jagged peaks and are a UNESCO world heritage site. Small mountain villages with gabled tile roofs abounding, with yellow and white plaster buildings–some painted with imagery–were situated on sloping hillsides underneath those jagged peaks. But it is the flowers and the church buildings and steeples that steal the attention. Flowers were everywhere, in window boxes, in gardens, in street pottery and hanging from antique light posts. There were bridges with cascading flowers. Round abouts had centers with huge carved wooden imagery and flowers, flowers, flowers. Reds, yellows, purples everywhere. What a refreshing sight! The church steeples were tall and slender or onion-domed. Some had decorative tile roofs. All in all, it was more than the eyes could capture, but the overall effect was magical, especially when the clouds and midsts blew in between those jagged peaks on this cool late summer day. WEG – Sunday, September 13, 2015 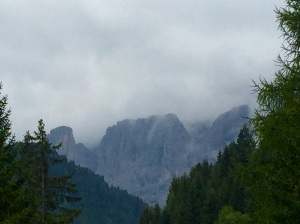 The Dolomites, a World Heritage site

A Sunday afternoon family mountain stroll in the Dolomites 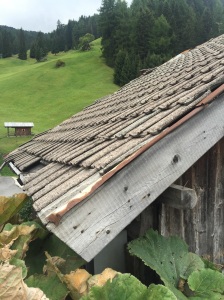 A scene in the Dolomites

Pausing along our leisurely drive through the Dolomites 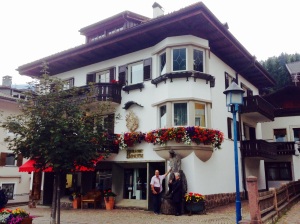 Rhonda & Allen enjoying the beauty of the communities within the Dolomites 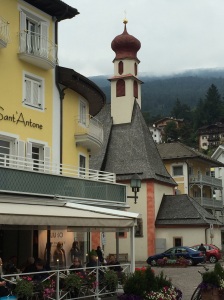 Village beauty in the Dolomites