It’s our first time in Poland and for our first meal, I ate lard on bread. Don’t knock it until you’ve tried it. It was good. Made with lard and garlic, it spread easily over the fresh baked roll, also made with garlic. The main course was an oven baked bread pocket filled with beef and cabbage or chicken and cheese. Delicious. 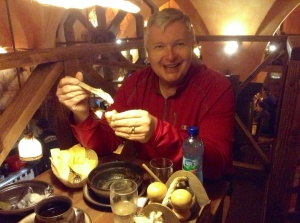 Eating lard on bread in a traditional Polish restaurant in Wroclaw

The train ride from Dresden to Wroclaw was one of the longer we have taken to date, so we didn’t get in much sightseeing once we arrived. However, the train ride was marvelous. Valleys and hills and lakes and rivers surrounded by trees rushing toward full fall colors. I could not take my eyes away from the scenery during the journey.

Autumn scenery on the train ride between Dresden and Wroclaw/Breslau,
October 15, 2013

I made an honest tourist mistake once we arrived. Poland is part of the European Union, so I automatically assumed they used the Euro. While they do, it has not caught on yet, and so the old currency is still in effect. The taxi bill to the hotel was 25.80 (I’m thinking Euros) and that was outrageously high for our short journey. The older cab driver (he did not speak English) was taking my Euros as I counted them out and when I got to 20 he waved his hand to stop and said goodby and drove off. I inquired at the hotel desk, and they informed me that my 20 Euros were worth 84 Zloty–I had paid the gentleman over three times the amount needed. I told Kathy that maybe he needed that money today, and we blessed him with it. WEG 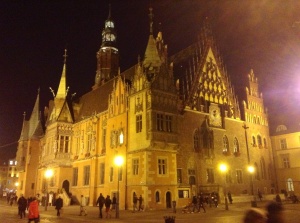