The Nazi Camp System, both concentration and death, is certainly one of humanity’s low points. It was evil planned and executed with precise detail. Dachau, on the outskirts of Munich, was the first official and model camp from which the extensive system grew. Tied to the SS, the elite core of Nazi leadership, Dachau was first the place where political opponents of Hitler were sent to be “re-educated,” and it turned into the place where the most horrendous crimes against humanity were carried out. Its crematorium burned night and day. Its slogan, later adopted by all the camps, “work will set you free,” was a cruel joke, since prisoners would only find death in this place. Our time in Dachau was a chilling reminder of the human capability to be inhumane. 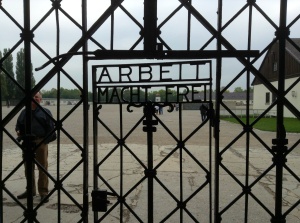 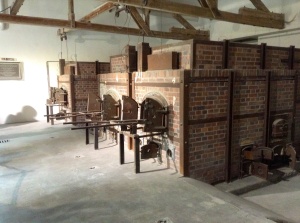 Building and artistic creativity are certainly some of highs we have experienced. Although the food is good and the Bavarian entertainment is indeed entertaining, the beauty of the Hofbrauhaus, the oldest beer hall in the world, was what I enjoyed the most. The huge barrel ceiling painted in Bavarian design uplifted the evening’s experience. The mountain castles, Linderhof and Neuschwanstein, of King Ludwig II in the Bavarian Alps, are indeed a flight into fancy and fantasy. From the choice of geography to the thematic art that coursed through the architecture, the castles are splendid. Linderhof is a tribute to King Louis the XIV, the Sun King of France. Gold and white to the max, each room holds exquisite pieces of art in crystal, porcelain, ivory, wall coverings, furniture and paintings. The grounds are filled with fountains and flowers and arbors that radiate from the palace with wonderful ease. Neuschwanstein is probably the most recognized castle in the world. It was Disney’s inspiration for his parks. Perched on a pinnacle in a gorge, with waterfalls flowing down from above and towering over a lake below, this castle is the ultimate in one’s King’s fantasy world. The castle was designed on the theme of Richard Wagner’s operas. Each room used an opera as its inspiration and tried through art to bring the opera to life. Unfinished inside, due to the King’s mysterious death only a few days after he was declared insane, the thirty rooms that are completed are astonishing. Some might think the castles are “overdone,” but most would agree that they are high points of art in the style of High Baroque.

My emotions have been stretched “every which way” the past two days. That is what the juxtaposition of humanity’s highs and lows does to a person’s psyche. WEG 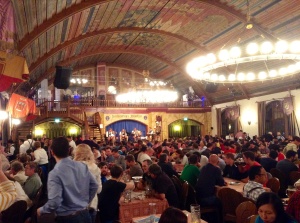 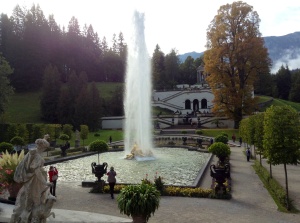