Passau is a beautiful city in southeastern Germany near the Austrian and Czech Republic borders where the Danube, Inn, and Ilz Rivers join together to make the Danube a mighty river. The Altstadt (Old Town) is built on a peninsula bounded by the rivers. Its cobblestone streets are lined with colorful German style buildings, but with rare exception, not the half timbered type we have seen in abundance along Germany’s Romantic Road. The onion-domed copper towers of the St. Stephen’s Cathedral can be seen from most vantage points in the city. By the way, in Germany, a cathedral can either be a Dom–Roman Catholic or a Munster–Lutheran. St. Stephen’s is a Dom.

St. Stephen’s is in the style of Italian Baroque. Massive and white in the interior, the eyes are drawn upward to the sculptures and painting on the ceiling. The windows are not stained glass, in order to let light flood into the interior. However, St. Stephen’s claim to fame is its mighty pipe organ, until recently, the world’s largest, with 17,774 pipes and 233 registers. Set within the whiteness of the cathedral, its blackness lets it stand out with impressive boldness and majesty. To say that it is an awesome sight is, indeed, an understatement. Stretching through the balcony into all three naves of the cathedral, the camera could not capture its immense size. In addition, two positivs are situated in the choir near the high altar.

We thoroughly enjoyed our day in this river city. WEG 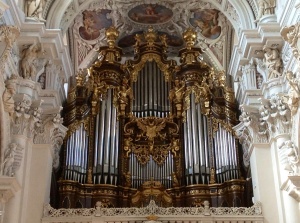