+Did Rhonda ride a train, a subway, and a bus all in one day?
+Did Rhonda ride transportation in order to partake of the “longest bar in the world” in Dusseldorf, Germany?
+Did Rhonda “ride” the Aachen Altar Guild about how they arranged the Cathedral flowers?
+All of the above?

Yes, it was, all of the above!

What an eventful day! We experienced almost all forms of transportation as we traveled to Aachen and Dusseldorf today. Aachen is famous as the founding point of Europe, when Charlemagne united most of the continent as the Holy Roman Empire in the late 700s A.D. Aachen was the seat of Charlemagne’s government, and the great cathedral that was built there was the scene of over 40 coronations of royalty over the centuries. The interior is basically royal blue and gold mosaic tile–gorgeous and regal! A city fair was just kicking off, and the winding cobble stone streets lined with beautiful traditional buildings were alive with outdoor cafes filled with people.

Dusseldorf is the fashion center of Germany, with its famous “Ko” street lined with exclusive shops. We, however, were more interested in the Altstadt, or Old Town, which is noted for its numerous (over 300) biergartens and eateries, acclaimed as “the longest bar in the world.” We walked the River Rhine and the narrow streets of the Altstadt dotted with many beautiful plazas. We ate German potato salad, cabbage slaw, potato pancakes, German beef goulash, and other traditional foods.

We were thrilled with the traditional German architecture we encountered today in both Aachen and the Altstadt in Dusseldorf. Lots and lots of pictures were taken. The weather was wonderful as was our day. WEG 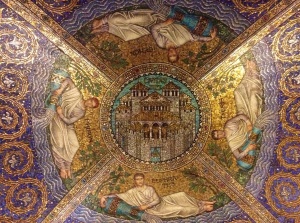 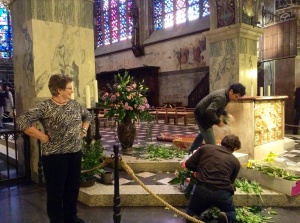 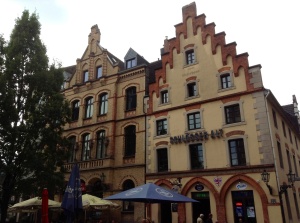