We said “goodby” to our friends in Telgte, Germany, took the train to Koln (Cologne) and said “hello” to our Tomball/Rosehill friends, Allen and Rhonda, who are joining us in a German travel adventure over the next few weeks.

We spent a great afternoon in the magnificent Koln Cathedral. Its twin spires reach 516 feet and the Gothic structure is magnificent as it towers over the Rhine River. The flying buttresses almost seem delicate, like lace. The interior contains beautiful stained glass windows, but the highlight of the church is the huge gold container, in which, it is claimed, are the remains of the three Wise Men, who brought the gifts of gold, frankincense and myrrh to the Christ Child. The end cap of the container holds their three crowns, which are only displayed on January 6–Epiphany–the date on the Christian calendar commemorating the coming of the Wise Men to Bethlehem.

Since Rhonda has been active in the Altar Guild at Salem Lutheran Church of Rosehill over the years, we visited the Cathedral Treasury, which houses the religious supplies of the cathedral, still in use, but centuries old. Gold and sliver communion ware, Cardinal copes and mitres, altar linens and illustrated liturgy books were some of the precious items held in the treasury. Before we knew it, several hours had passed.

At the side of the cathedral plaza we found the old Roman road, uncovered in more recent excavations. Built in 37 B.C. when Cologne was an important Roman outpost, the bumpy rock road gave credence to the ancient phrase, “All roads lead to Rome.” We walked the road built before the time of Christ.

It was time to eat. We headed straight for the Fruh Brewery, known for its Kolsch beer, which is served in thin glasses. If you don’t put a coaster over your glass, the wait staff will keep bringing beer, putting a mark on a coaster to keep count. We all ordered traditional German fare like oxtail soup and sweinhoxen (a braised pork hock). Very good! We didn’t have room for dessert. A great first day for a German adventure. WEG 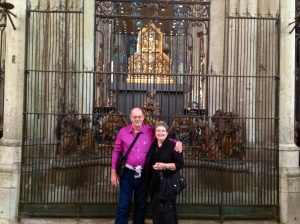 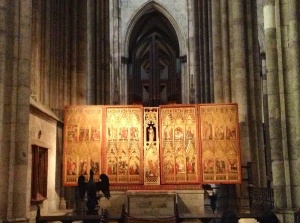 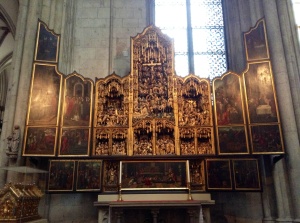