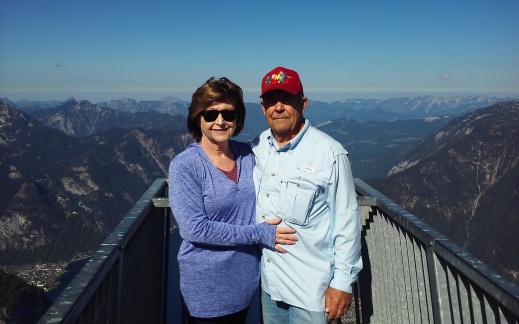 The Tyrolian village of Hallstatt draws one quickly into its charm. The narrow cobblestone streets reveal mountain gingerbread-style houses stacked above each other on the mountainside with the clear and clean lake shimmering on the other side. A waterfall falls in the middle of the city just above the cozy village square. A Lutheran church with a beautiful steeple commands the square, and a Catholic church sits majestically on the hill above. “Picturesque” does not describe the scene adequately enough.

Our group explored the city; yet, other activities also beckoned. Mike and Sandra went to the unique ice caves high above the mountain lake. Not only did they do the remaining strenuous climb after the bus dropped them off, but braved over 500 steps inside the cave to see the ice formations that were like stalactites and stalagmites in regular caves, but made of ice in this cave. Wayne and Kathy took the funicular (a cross between an elevator and cog train) up the mountain to the world’s oldest salt mine. 7,000 years of production have brought wealth through the ages to Hallstatt and still today, 300,000 tons of salt are produced annually. Riding a run-away salt mine train inside the cave and sliding down steep 100 yard slicker slides into the mine depths were exciting parts of the journey. We did not know we had bought tickets for amusement park rides, but in reality, these activities were a part of the miners’ everyday existence. Allen, Rhonda and Sherlene went to the Bone Museum, where they viewed old skulls, displayed with the name of each deceased carefully inscribed for public view. Because usable land is scarce in Hallstatt, those who have been dead the longest are dug up, the bones dried and sculls inscribed, in order to make room for new bodies in the grave site. Sherlene took one look and fled the site. Allen took pictures and Rhonda looked for long lost relatives.

It was a fascinating day in one of the prettiest places on this planet. WEG

Leaving the beautiful Italian lake country behind, we trained to “Fair Verona” for a stroll through the streets to see the Arena, the second largest Roman amphitheater after Rome’s Coliseum. I have seen the arena on television many times since it is featured in musical and theater productions frequently. It is not, therefore, a ruin, since it is in rather good shape after these thousands of years of use. Verona is a very nice city, clean, easy to navigate and with many historical sites. Of course, we had to go by Juliet’s balcony made famous by Shakespeare in his soliloquy for Juliet on that balcony–“Romeo, Romeo, wherefore art thou, Romeo.” Naturally, the tourist balcony is not the real one; however, thousands flock to it and leave love messages on the walls around it. While in the city, Charlotte could not pass up a pair of Italian shoes that she spotted in a shop window. Dan thought that she had brought along enough pairs of shoes–totally missing the point, that these were Italian shoes, and this was a special vacation purchase. Everyone cheered Charlotte on to buy the shoes, which she beautifully wore the rest of the day.

We then trained on to Bozen (German) / Bolzano (Italian) in Italy’s South Tyrol, formerly a part of Austria. Most people here still speak German, and the region has a unique atmosphere with distinctive foods and architecture–not Italian and yet, not quite Austrian either. We were surprised that, as we strolled the wonderful streets in the crisp air, we heard the strains of music. Happily, this evening a concert of several bands was playing in the Walther Platz (piazza/square). With South Tyrollean Alps looming overhead and the cathedral bells pealing, we sat to eat in an outdoor cafe where we could both see and hear the bands play. Dressed in native South Tyrollean dress as they marched and played, we experienced a true unexpected travel experience. I approached a band member who spoke English, and he explained that each valley in the region has similar unique traditional clothing with important distinctions that characterize each region; each region also supports a band. How blessed we were for this great evening of fine music!                            WEG – September 12, 2015

The Arena in Verona, Italy 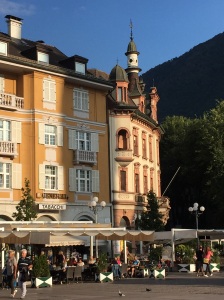 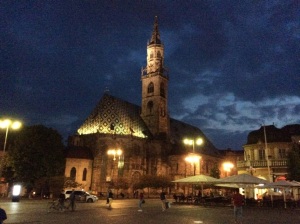